Neubauer, Tourangeau Score Comeback Win and Over $150,000 in Cash and Prizes At Cabela’s National Team Championship

The final event of the 2014 season kicked off with 10-12 teams still within striking distance of the prestigious 2014 LEWT Team of the Year award. The two day championship event held at Huron Ohio would decide the 2014 battle for Lake Erie Walleye Supremacy!

The first day of the tournament was sunny and calm as the team of Ronnie Rhodes and Joe Whitten brought in a monster bag of five fish weighing 49.23# to take nearly a seven pound lead going into Sunday. On day two anglers were met by cloudy skies that were in no time giving way to rain. No problem for Rhodes and Whitten as they added another 44.36 pounds for a two day total of 93.59 pounds, as they cruised to their second victory of the 2014 campaign. Second place went to Jason Kopf and Rodger Riggs with 10 fish and 82.14 pounds. In the third spot Robert and Anna Lester had a two day total of ten fish and 78.54 pounds.

Rhodes and Whitten also brought in the largest walleye of the tournament at 11.33 pounds to win the first place Big Fish cash prize. Second place cash went to Randy Cline and Robert Kitts for an 11.22 pound walleye.

Randy Cline and Robert Kitts cashed in on the $150 Medina Plating Early Bird award that goes to the top finishing team that entered all four events before the Early Bird deadline. 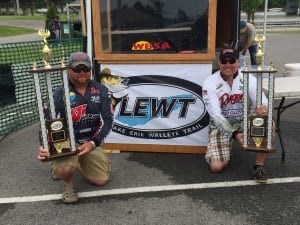 2014 LEWT Team of the Year, Randy Eyre and Corey Miller

Using a random drawing, four teams were awarded vouchers for a free electronic mapping chart from LEWT sponsor Navionics. This is a great prize. The $50 J&J Roofing Loyalty cash was also given via random drawing.

The top three teams in the Team of the Year race will receive bids to represent the WBSA/LEWT at the Cabela’s National Team Championship event in 2014, sponsored by The Walleye Federation.

Over two days the 46 teams brought 432 walleye to the scales that averaged 6.49 pounds. Teams mentioned fishing from Kelley’s Island clear over to Lorain. The winners used Reefrunner crank baits to pull their winning bag, while the rest of the teams reported using a mixed bag of crank baits and crawler harnesses.

For more information about WBSA/LEWT, and full results on our tournaments and Team of the Year standings, please visit www.wbsa.us

The Western Basin Sportfishing Association is a social based club for anglers that fish in the Western and Central Basins of Lake Erie and its tributaries. Membership is open to anyone interested in fishing, no matter their location or skill level. Our goal is to present information in a manner that will help sustain and improve fishing in one of the greatest inland sport fisheries in the world. Scientific information, fishing techniques, locations and presentations are presented at our meetings by expert and knowledgeable speakers and tournament anglers from our group. These anglers are very open with techniques, and will help any member that is trying to learn new methods.