Great weather and a convincing win at the Cabela’s, Crown Battery, Sharpnack Direct, Lake Erie Walleye Trail. (LEWT) The third straight sold out tournament of the 2015 season was the “Ole Pete” Memorial in honor of the memory of Don Peterson. Don was a long-time club member and competitor on the LEWT circuit. Don’s “Ole Pete’s Tackle” company was also a supporter of the Western Basin Sportfishing Association and the LEWT.

A full field of anglers thundered out of the Sandusky bay on a warm morning with light winds and cloudy skies, but a significant chance of thunderstorms throughout the day would keep all of the competitors wary of the skies. “We had some small cells pass by to the east and west throughout the day” commented LEWT tournament Director Jeff Lash. “But I was very pleased that we were able to safely hold our tournament and weigh-in without getting hit by
thunderstorms.” 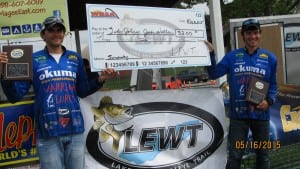 With a margin of nearly nine pounds over second place, Zak Jobes and Josh Wells pulled away from their competition with five walleye weighing 48.75 pounds for the win, and a check for $3300. Second place went to Randy Eyre and Corey Miller with five fish and 39.95 pounds, Dave Frey and Lonnie Hanchosky took the third place with five fish weighing 38.48 pounds. 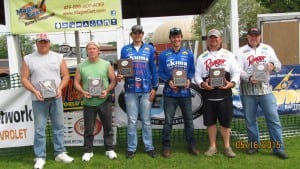 Jobes and Wells also won the Medina Plating Early Bird award worth another $150 that goes to the top finishing team that entered all four events before the Early Bird deadline.

Many LEWT anglers donated their catch to the club. These fish were cleaned and this will result in more much needed fish being donated to the Second Harvest Food Bank.

Jobes and Wells caught their winning bag near Lorain using reefrunners. Good catches were also reported off Kelley’s Island shoal and north of Huron. Several teams also did well using worm harnesses but had to work their way through a lot of junk fish. A total of 250 walleye were brought to the scales, with the average weight being 6.38 pounds.

The final four teams have been set in the $6400 LEWT Knockout Challenge. At day one of the championship at Huron it will be Mike Robertson & Michael Tobias versus Zak Jobes & Josh Wells for a spot in the final day. The other spot will be a battle between Mark Brumbaugh & Shawn Ritchie versus Rob Lester & Robert Cline. On day two the finalists will battle for the $3000 top prize. Second place will pay $2000, third $1000, and fourth $400.

The battle for Lake Erie Walleye Supremacy and the prestigious LEWT Team of the Year award has defending 2014 TOY champions Randy Eyre and Corey Miller holding a narrow four point lead over Sandusky winners Zak Jobes and Josh Wells. Lurking just eight points back are the Lakevue tournament winners Paul Holzheimer and Bill Miller. Realistically, any team in the top ten could win it depending on how they finish up at Huron.

For a complete list of the tournament results, or for more information about the LEWT please visit www.wbsa.us You can also find us on Facebook at https://www.facebook.com/wbsalewt