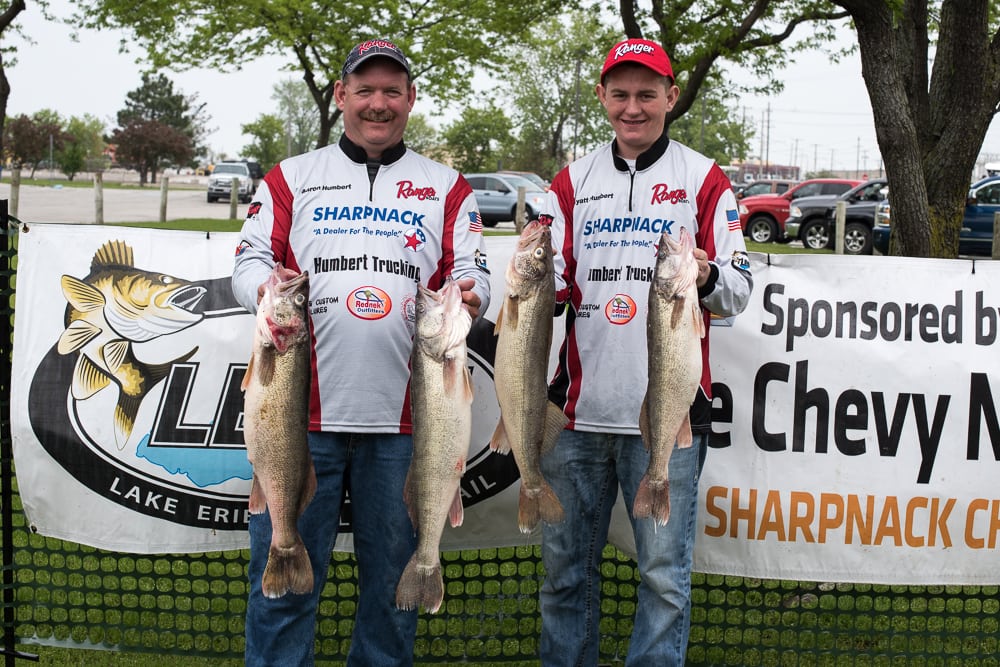 “I heard from a number of teams that got out to fish Saturday afternoon that the last front had shut off what had been a hot walleye bite,” LEWT Tournament Director, Jeff Lash, commented. “I’m not quite sure what to expect this afternoon, but it seems like someone always figures the fish out.” 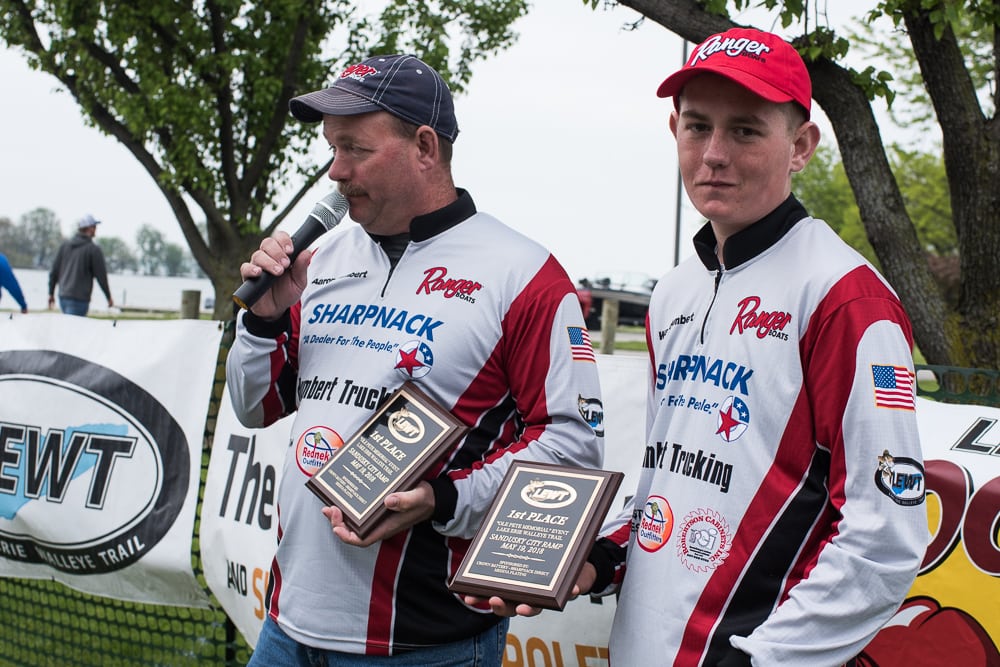 Figure them out they did, as the father and son team of Aaron and Wyatt Humbert of Republic, Ohio, shocked the field by staying inside Sandusky Bay and collecting a monster bag of five walleye weighing 39.14 pounds to take the win and $3,100. 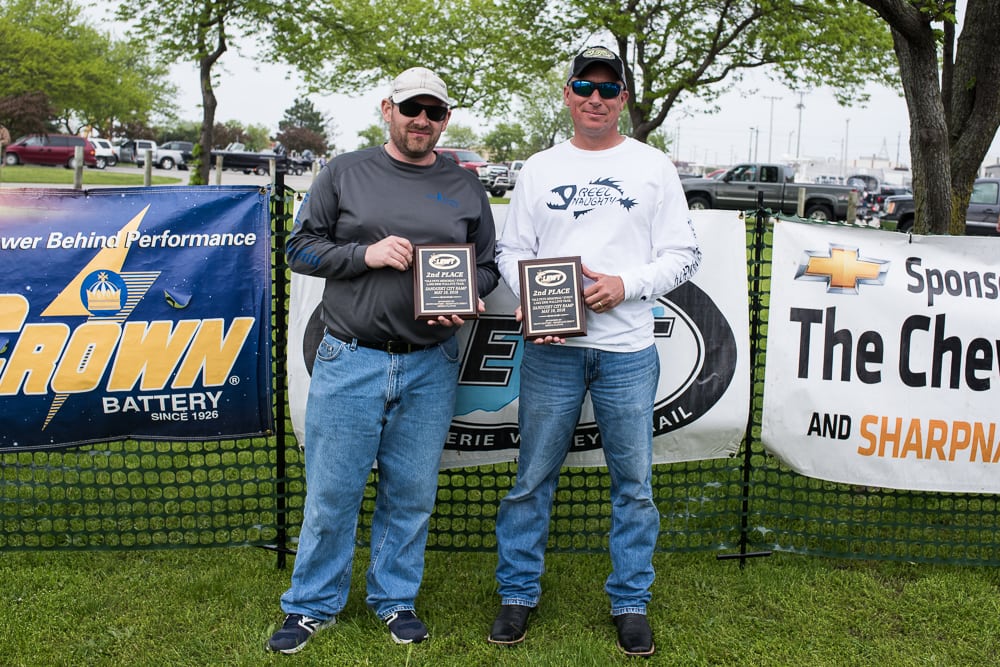 Second place and $1,725 went to Jerome Dorlack of Northville, MI, and Nick Meisner of Swanton OH, with five walleye weighing in at 32.64 pounds. 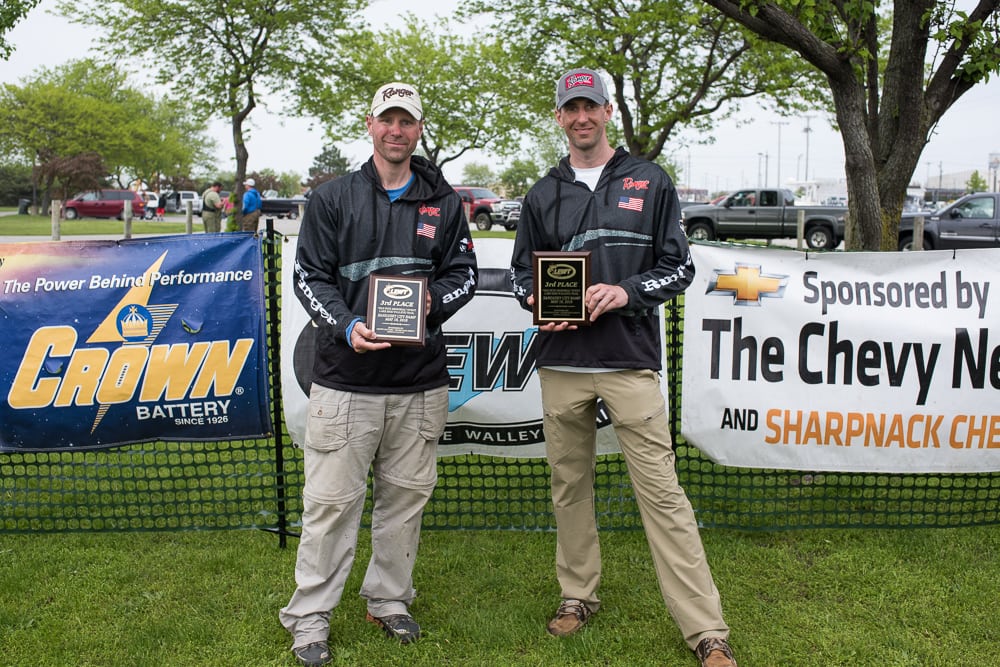 Third place and $1,300 went to Michael Doornink of Wexford PA, and David Pontius of Blacklick OH, with five fish at 32.53 pounds.

The first place Big Fish plaques and $562 also went to tournament winners Humbert and Humbert for landing the largest fish of the tournament at 10.18 pounds. The second largest walleye of the day weighing in at 8.96 pounds, worth $368, was landed by Shawn Hornbeck of Fredericksburg OH, and Tyler Bethold of Columbia Station OH.

Long time LEWT supporter Sharpnack Direct in Willard Ohio offers a cash prize to the highest finishing LEWT angler at each event who owns a used or new vehicle purchased from Sharpnack. The Humberts also won this $150 cash award.

Ranger Boats pays $500 to qualified Ranger boat owners under their Ranger Cup program. The Humberts continued their clean sweep of the top awards by collecting the $500 award!
Medina Plating sponsors our Early Bird contingency that goes to the top finishing team that entered all four events before the Early Bird deadline. Of course, Aaron and Wyatt added this $150 prize for a total take on the day of $4,462!

The final four are set in the $6,400 LEWT Knockout challenge. The NCAA style knockout format pits two teams against each other at each tournament, with the final four fighting it out at the two-day championship finale held in Huron June 8 & 9. Day one will have Aaron & Wyatt Humbert matched against Roger Hill and Dave Frey. The other side of the bracket features Bob Barnhart and Eric VanDenk facing off against Shawn Ritchie and Mark Brumbaugh. Day one winners will fight it out on day two to see who takes home the $3,000 first place prize. Second receives $2,000, third $1,000 and fourth place is worth $400.

The “Ole Pete Memorial” is held in remembrance of our friend, and former club member Don Peterson. Don was an avid competitor and supporter of our club and circuit, and he is dearly missed by all.
Many of the LEWT anglers donated their walleye catch, which will be cleaned by Lake Fish in Sandusky. These filets are donated to the Victory Temple Soup Kitchen in Sandusky who uses this resource to feed people in our community who need assistance.

For a complete list of the tournament results, or for more information about the LEWT please visit www.wbsa.us You can also find us on Facebook at https://www.facebook.com/wbsalewt 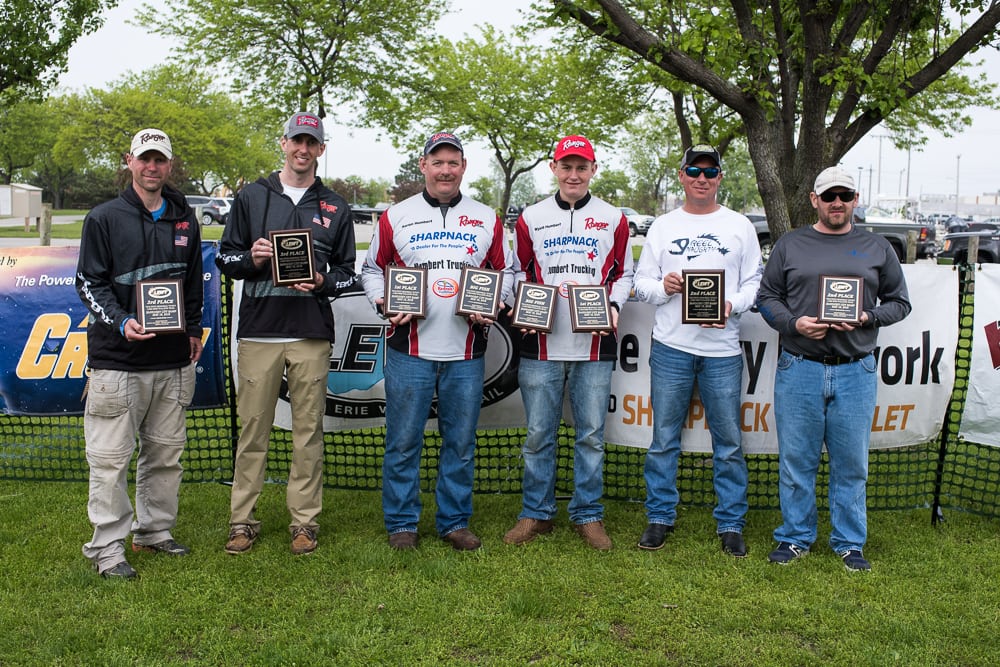