Saturday brought warm weather and a hot bite.  There were a variety of tactics being used to catch the elusive walleye.  Jigging, Trolling and Lindy rigs were all on the docket today.  The top team of Mueller/Mueller brought in a healthy basket of 27.95 lbs., 2nd place went to father son team of Ericson/Ericson 24.9 lbs, and finishing out the top three were the team of Richardson/Hazen with 23.21lbs.

The fourth place team of Bill McGannon and Brian Hunke had a very nice weight of 22.79lbs.  Bill and Brian were the top qualifying team for the TWF sidepot.  The TWF team wins a guaranteed paid spot into the 2015 NTC being held at Milford Lake.  Congratulations to all the top teams from Saturday.

Sunday brought the same warm weather and a hot bite.  Many of the competitors were chomping at the bit to go fishing after Saturday’s large weights.  The father/son team of Bosard/Bosard brought in the largest basket of the day at 28.88 lbs., the team of Ericson/Ericson came in at 27.68 lbs. and rounding out the top three were the team of Presley/Otte with 23.38lbs.  Congratulations to these fine teams for the impressive weights and professionalism shown.

Sunday sadly didn’t meet the required amount of teams for the TWF Side-pot.  The NWA and CWA would highly recommend that all of the anglers participating in our tournaments to check out The Walleye Federations side pot program and the benefits, it brings to our tournaments. 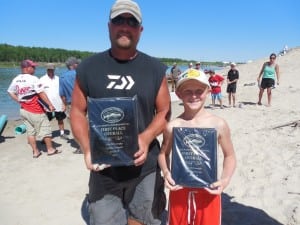 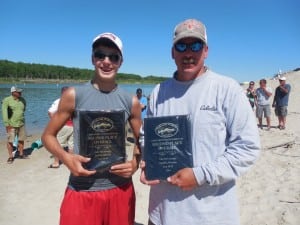 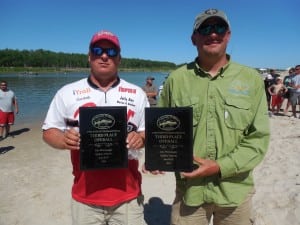