CORTLAND, Ohio-The Ohio Walleye Federation held its first tournament of the 2017 season on Sunday April 23rd at Mosquito Lake.  Thirty eight teams took to the water to compete for $6000 in prize money.

Mosquito Lake once again challenged anglers.  The Walleye were in a postspawn transition, sitting and watching most angler’s presentations with little or no interest throughout the week.  Fishing reports indicated scattered fishing.  Competitors were kept off balance as an emerging pattern one day lead to no fish the next the day.  Sunday brought temperatures in the mid 60’s with blue bird skies and little cloud cover, and a lot of hope from competitors looking to win the day. 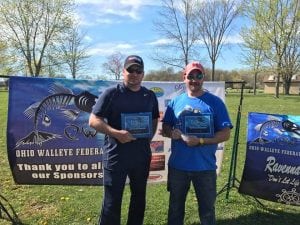 The team of Steve Booher of Wadsworth, Ohio and Donnie Burns of Austintown, Ohio took top honors with a 1st place finish with 5 fish at 13.19 lbs.   The team caught their fish in 13’-16’ of water. They vertically jigged ¼ oz vibes in chartreuse and lime green colors.  Steve Booher stated that “A friend gave us information the night before the tournament.  We fished a break in 13-17 foot of water.  The smaller fish were in shallower and the bigger fish were on the deeper edge of the break.  We had 15 keepers from 7:30 am to 9:30 am.  Our 2 biggest fish came back to back.”   Booher and Burns also weighed the second big fish of the contest at 22” and 4.27 lbs.  This was the team’s first win in the Ohio Walleye Federation circuit, and as Steve stated, “It is a sweet feeling”.

Second place was earned by Collin Murphy and Pat Smith with 11.71 lbs.  They jigged Vibes lures 50-75 yards away from the 1st place team.  Third place went to Mitch Shipman and Rick Mulraney with a creel of 11.66 lbs.  Shipman and Mulraney trolled leadcore with Flickershads in the north end of the lake.  The teams of Marion Erb and Robert  Burkholder 11.51 lbs and Jim Gwynn and Matt Whitacre 10.51lbs rounded out the top five.  Big fish weighed in at 4.41lbs and belonged to Dave Yoder and Rick McIntyre, who caught the fish trolling monofilament line and perch color Flickershads .

The Ohio Walleye Federation will hold its next event on Berlin Lake May 7th.    The OWF events are made possible because of our sponsor support from Ravenna Marine, Vic’s Marine, Haine’s Marine, Worldwide Marine Insurance, Warrior Lures, and Goschinski’s Fin Feather and Fur along with many others.  For more information please visit www.fishowf.club or e mail fishowf@gmail.com.

The general public is welcome to attend our weigh-ins beginning at 3 pm the day of the event.  The OWF promotes “Fishing, Family, Friends and Fun!”

These sponsors make our tournaments possible!!!!