Conneaut, OH-August 12th 2017-Waleye Madness held its series finale on what would be a breezy day on Lake Erie. Teams launched boats at the Conneaut Port Authority Ramp set to find 5 fish to bring to the scales. 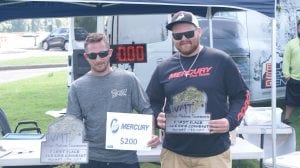 Hard work prevailed as the team of Chase Cominsky and Lee Canon captured 1st place. Their Mercury equipped boat had them making a big run to Geneva. The big run didn’t pan out as planned as they found out quick the fish would just not bite. The fish were negative and they needed to make the choice quick. They reeled in their rods and headed back east to Ashtabula where they were able to locate active fish. “We got double right away” said Cominsky. They were able to stay on the active pod of fish, bringing 5 fish that weighed 34.05#. “Pulling deep bayrats on wire caught most of our fish” Canon explained. The team also was the highest finishing Mecury boat good for $200 totaling a payday of $2750.

Second place honors went to Emil Banar and Tim Heslop with a bag of 33.47#. They made a big run to the 14 line to get there 5 fish. Hendricks and Ulmer took 3rd place with a 31.62# bag anchored by the Buckeye Sports Center Big Fish of the day. The fish weighed in at 9.79lbs good for $200. The team ran bandits with weight added to get to the depths they needed to. The team of Leigh and Doughty received 4th place honors with a 24.74# bag. Rounding out the top 5 was Dean and Metzger. Lund Contingency honors went to Lint and Clayton. Lund Boats offers $300 to the highest finishing Lund Boat.

WMT would also like to congratulate Team of the Year Adam Momirov and Ryan Cecil they put together a great year and will be awarded the winner take all pot and some custom jackets.
WMT will be holding 2 special events this fall. October 15 at Berlin Lake and November 18th Cleveland Night bite out of Edgewater. Please watch for updates as both tournaments will sell out!

WMT would like to give a special thanks to the staff of Conneaut Port Authority for their hospitality.

Walleye Madness Tournaments offer true 100% payouts and no membership fees. Buckeye Sports Center Big Fish, Mercury and Lund Boats bonuses are added bonuses that are not taken out of the entry fees! That’s $700 added to each tournament! Every entry fee is given back to the winners, nothing ever held back! Big thanks to our title sponsors Buckeye Sports Center, Lund Boats and Mercury Marine. Also our awesome contributing partners Canyon Coolers, Rednek Outfitters, Accu-Cull, Airwave Pedestal, Sunoco, DB Marine, Worldwide Marine Insurance, Vibe, Oakley, Northland and Opti-Tackle who donated over $8000 in merchandise to be given out to the anglers at each tournament. Please go to walleyemadness.net for full standings and registration. Over 200 photos can be viewed on our Facebook page. Don’t miss out on our one of kind tournaments!