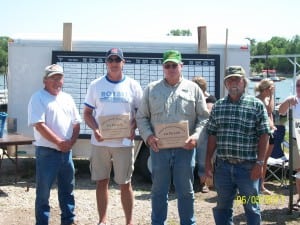 The top five Harlan Anglers Members Placements for the tournament were as follows:

The 2nd place team of Derek Wagner & Steve Maurer fromNebraska caught 6.06 lbs of walleye the first day and 9.02 lbs for day two for a total weight of 15.26 lbs.

The 3rd place team of Tom Jacobs & Gene Lawyer fromKansascaught 5.62 lbs of walleye the first day and 7.5 lbs for day two for a total weight of 13.12 lbs.

The 4th place team of Bill Anderson & Tim Long fromNebraskacaught 7.98 lbs of walleye the first day and 3.76 lbs for day two for a total weight of 11.74 lbs.