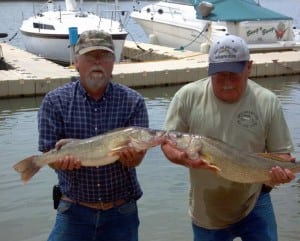 Sunday June 3 2012 Harlan County Lake was calm and the fishing was good. The annual Harlan Anglers Walleye Tournament was held that day with twenty-nine teams with twenty-three teams catching walleye.  Sixty-two fish were caught totaling more than 180 pounds. Seven fish weighed in over five pounds, three fish over seven pounds, and one fish over nine pounds. It was a very good day for fishing to say the least. 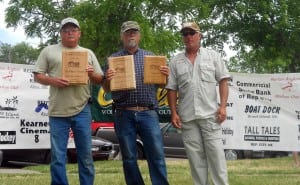 After being weighed in, all the fish were released back in to the lake.

The top three winning teams were all members of the Harlan Anglers Walleye club.

Rod Hoard of Alma caught the big fish of the tournament at 9.16 pounds and won the Big Fish award.

Rod and his fishing partner, Bob Land of Bertrand, won First place with five fish for a total weight of twenty-three pounds.

Second place went to Bill Anderson and Tim Long, both from Holdrege. They pulled in five fish that totaled 19.74 pounds with a big fish at 7.92 pounds. 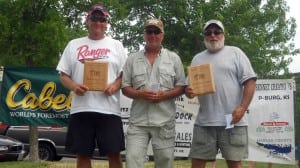 Brian Brinkman and Ryan Batenhorst, both also of Holdrege, won Third place with five fish that came in at 16.92 pounds.

Fourth place was won by Roger Sheckler and Ken Gewecke, both of Kearney. They caught five fish for a total weight of 16.80 pounds.

Rich and Lisa Crase of Omaha came in at Fifth Place with three fish at ten pounds. 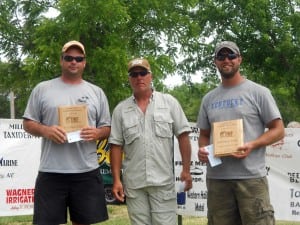 Great job to everyone in the tournament!