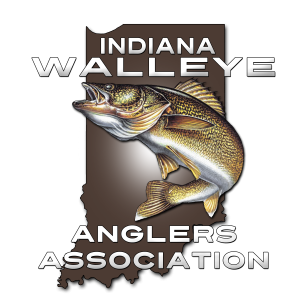 The 2019 season proved to be quite challenging for the members and teams competing in IWAA events. Extreme weather and lake conditions hammered the entire season. In April, teams competed on Prairie Creek Reservoir 22 teams made dealt with icy temps 20 MPH winds. Geoff Church and Tim McFarland still managed to find 5 nice walleyes to win both the event and the NTC sidepot with 18.32 pounds.
Next up was Indiana premier walleye fishery, Brookville Reservoir. Muddy rising water levels and more wind and cold rain plagued yet another event. Mike & Bobby Chandler ground out a win with10.48 pounds. The top 5 were separated by mere ounces. Isaiah Noah & Doug Jarrett took second place honors including the NTC sidepot win.
The IWAA event 3 brought warm stormy weather. As most of the teams were camping at Monroe Reservoir for the event, many lost the tents and gear as they took shelter in a tornado shelter. One team was trapped on the lake and many were forced to make the ride home wet and cold as conditions and forecasts resulted in a cancelation and reschedule. The Fourth event to be held on Indiana’s largest lake, Patoka Reservoir was cancelled as waters reached 18 foot over summer pool closing all roads and bridges and making the lake inaccessible to the public.
Members voted to move the Patoka event to a new lake on the states western edge. 12 teams made the start at Sullivan Lake for the Patoka make up. They were greeted with the hottest temps of the season. Temperatures reached 98 degrees by weigh-in. Rusty Kimmerly and Devin Metz brought in 5 saugeyes for an even 8 pounds for a victory.
Monroe Reservoir make up seen only 11 teams. Once again, high dirty waters along with the state pulling maximum water through the dam dropping the lake over a foot a day proved to be challenging for sure. Again, Geoff Church and Tim McFarland took top honors with 2 fish weighing 4.59 pounds. Only 4 fish were brought to the scales for the entire event.
Event number 5 held at Summit Reservoir went to Bill Krintz and Chuck Morgan with 8.48 pounds as the bested 21 teams for the win. Doug Frazier and Chad Martin won the NTC sidepot finishing in second place. To end the regular season the IWAA held its annual charity event seeing 39 teams compete on Brookville Reservoir. Tony Winkler and Jimmy Lang scored a win with 5 fish for 10.07 pounds and donated their winnings back to the charity. This year’s charity went to benefit a family with a newborn in sever medical conditions.
The IWAA 2-day championship on Brookville showed how tough walleye fishing can be. With warm waters, dropping waters levels and high pressures lake temps were 10 to 15 degrees above normal for the time of year. After a dismal day one, Geoff Church and Tim McFarland made a big come back on day to win the weekend with 13.84 pounds. They also wrapped up Team of the Year honors as well.