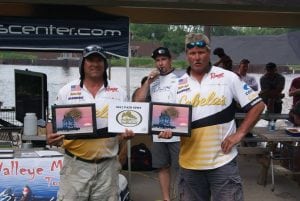 Lorain,OH- Jason Kopf and Rodger Riggs capture Walleye Madness Lorain with a weight of 40.92 Saturday. With a calm Lake Erie and hot temps fishing would be tough for most anglers. Jason and Rodger pulled Reef Runners near Avon Point. On top of their first place finish the duo captured a paid spot for the 2017 National Team Championship in Lorain.

“It feels good to capture a spot for the NTC, huge relief off our shoulders.” Kopf said. 25 teams battled it out in the biggest NTC Side Pot in Ohio. On top of their paid spot they will receive NTC plaques, custom jerseys, $100 in Cabela’s gift cards and $200 in travel money. Jason and Rodger take home $3500 in cash and prizes.

Coming in second place was Mitch Shipman and Chad Fenstermaker with 40.02lbs. Mitch and Chad trolled worm harnesses at varying depths near Avon and Lorain. They also captured a paid 2017 NTC Spot and were the highest Mercury owner for a total earnings of $1900. Doug Fair and Todd Johnson finished third with 39.44 pounds for $950. Sam Cappelli and Ted Jackson lands 4th for $775. Rounding out the top 5 was Rico Mixon and Marina Leydiker.

The $300 Lund Boats Bonus was captured by the 6th place team of John Allen and Jason Maraskine. Buckeye Big Fish of the day was a 10.36 caught by Frank Murphy and Steve Borowske.