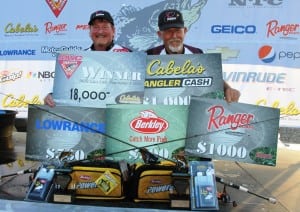 “Besides the birth of my daughter, this is one of the greatest things that ever happened to me,” an emotional Yohe exclaimed seconds after claiming his first major victory in a 10-year tournament career spanning lakes and rivers from New York to North Dakota.

“It’s absolutely tremendous,” added Brant. An armed forces veteran, Brant also drew thunderous applause on the eve of the event while appearing with Yohe at the rules meeting on behalf of Zippo Outdoors, and speaking on behalf of military veterans.

The team targeted 20- to 30-foot-deep transitions from rocks to mud with smiley-style spinner rigs and slow-death rigged nightcrawlers laced with nightcrawler-flavored Berkley Gulp! Alive! attractant spray. “We use it for washing our hands, too,” Yohe noted, adding with a grin, “Charlie would gargle with it if I let him.” They also put together slow-death patterns using Berkley Gulp! Pinched Crawlers, and a crankbait system with Flicker Shads for insurance. Ten-pound-test Trilene XT was their line of choice throughout prefishing and the tournament.

The win was worth more than $21,000 in payout cash and sponsor contingencies, including a $1,000 Cabela’s gift card from the Cabela’s Angler Cash Program, $1,000 Ranger Cup award, $500 Lowrance Electronics HDS/Elite DSI contingency, $500 Berkley Baits Berkley Tackle Package, $160 in U2/Oxygenator awards, and a pair of Okuma Dead Eye rod-and-reel combos for being the highest-placing Premier (earlybird) Team. Yohe and Brant also went on to place fourth in the NTC.

In all, the top 26 teams shared more than $75,000 in cash, sponsor bonuses and Big Fish Pot winnings. The tournament offered two days of competition on Mille Lacs’ world-class walleye fishery. A total of 988 walleyes weighing 1,246.46 pounds crossed the scale in the catch-and-release event. Big fish was a 7-pounder brought in by Minnesotans William Schultz of East Bethel and Andrew Fraley of Columbus.

The tournament was held in conjunction with the first two days of the Cabela’s National Team Championship, a three-day event featuring 228 teams from more than 60 walleye clubs across the country. Travis Sanger and Terry Zimmerman brought their A-game to Minnesota to win the NTC crown. “This is incredible—I don’t know what to say,” Zimmerman, of Ashland, Nebraska, grinned moments after claiming victory in front of a roaring crowd at McQuoid’s Inn just north of Isle. “It was such a close tournament, we didn’t know if we had enough.”

During the first two days of the tournament, the entire NTC field battled to “make the cut,” as only the top 25 boats competed on Day Three. After a fantastic kick-off banquet and rules meeting at Grand Casino Mille Lacs on the eve of the event, the competitions were held at Izaty’s Resort Days One and Two, and Mac’s Twin Bay and McQuoid’s the final day.  Following Thursday’s weigh-in, the Cabela’s MWC, National Professional Anglers Association, Pure Fishing and Zippo Outdoors presented a Youth and Family Fishing Clinic, giving away free rod and reel combos, tackle and two Zippo Outdoor Family Camping Packs.

During the tournament, teams fanned out across the 128,000-acre lake, seeking fish spread from shallow rocks, weeds and sand to deep gravel and mud. A 5-fish team bag plus protective 17- to 28-inch slot limit meant the key to placing high was bringing the right mix of “unders” and “overs” to the scale each day.

To further safeguard the fabled fishery, the first two days of the tournament was catch-and-release, featuring weight deductions for non-releasable fish. On the final day, fish were donated to local charities. On Day Three of the NTC, the event was moved to Isle, with launch out of Mac’s Twin Bay and a drive-up weigh-in at McQuoid’s Resort.

“Watching the winning weight flash up on the stage was unbelievable,” added Zimmerman, of Ashland, Nebraska. He explained how bottom-bouncing nightcrawlers behind size 3 Cabela’s-brand Colorado spinner blades was key to their 26.13-pound total.

The tactic earned them the $30,000 first-place cash prize, along with a $60,000 Evinrude E-Tec powered 620 Ranger boat and ultimate bragging rights in the walleye world. The Ranger Cup contingency further sweetened the pot with a second fully-rigged Ranger 620, pushing their winnings past $150,000. In all, the Cabela’s NTC paid $121,000 in cash to the top 50 teams, plus $20,000 in Cabela’s gift cards awarded to the remainder of the field.

Adding to the excitement, the tournaments were filmed for television airing on August 4 on NBC Sports, along with other national networks. Media coverage will also reach North American Fisherman magazine’s 3.2 million readers, 75,000 Facebook fans of the North American Fishing Club, and a host of other venues.

On a charitable note, the Cabela’s MWC donated $15 per boat, for a total of $1,200, to the Minnesota Outdoor Adventure Foundation for its efforts to take combat-disabled military veterans and terminally ill children on fishing and hunting adventures. In exchange, the group provided an army of volunteers to assist with tournament operations, as did the Isle Chamber of Commerce and Mille Lacs Drift Skippers.

The Cabela’s MWC is open to all anglers regardless of club or sponsor affiliation. Registration costs $650 per tournament per two-person team, and remains open through the Sunday prior to each event. Payouts are based on the number of teams fishing each event. Overall in 2011, the Circuit paid back more than 120 percent of entry fees in cash payouts, team of the year awards, sponsor contingencies and winnings in the no-entry-fee Cabela’s MWC World Walleye Championship. To register or for details, call (877) 893-7947; visit masterswalleyecircuit.com, or email events@masterswalleyecircuit.com.