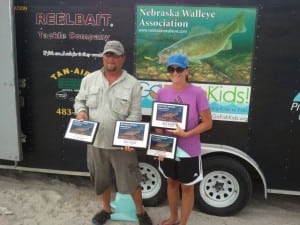 The 2013 Big Mac tournament was held over Father’s Day Weekend and for as long as I can remember the weather cooperated.  The NWA had a 28 boat field both days and launched out of Admiral’s Cove.  The rule’s meeting was held at 6 p.m. at the Sand’s Bar and Grill on Friday night.

Day 1, saw for a very slow bite for most, a lot of teams were coming in with 1 and 2 fish.  The team of Rossencutter/Rosencutter came in with a very nice 5 fish basket of 17.9 lbs. and their big fish weighed in at a whopping 11.27 lbs.  Rounding out the top 4 were the teams of Brandon/Conroy, Johnson/Hiilard, and Steinke/Steinke.  The TWF side-pot winner for day 1 was Oliver/Schroeder, with this win the team wins an automatic paid entry into the 2014 NTC, a gas stipend and other contingencies. 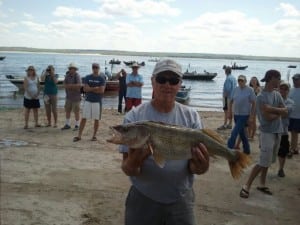 Day 2, saw more fish but lower weights.  The team of Canning/Canning brought in a 5 fish limit that tipped the scales at 13.06 lbs.  Rounding out the top 4 were the teams of Ericson/Ericson, Rosencutter/Rosencutter and Hesse/Hankla.  The TWF side-pot winner for day 2 was the brother team of Starostka/Starostka.  Congratulations to all the teams that were in the monies.

A big thank you goes out to all the teams that participated in the Father’s Day tournament.  For tournament help a thank you goes out to Rick/Dalton Smutny, Kelly Means, Chad Warriner, Jerry Steinke, Sand’s Bar and Grill, Lane and Tate Werner, Kenny Seffron, Chuck and Will Pavelka, Rick Hesse and Steve Hankla, and Ray and Betty Clayton.  Thanks goes out to Bryan at Jon Boy Lures for donating lures at the rules meeting.

Our next tournament will be held at Harlan Reservoir July 13/14.  The 13th is our last points qualifier and 14th is the NWA Open State Championship.  Hope to see everyone out there.