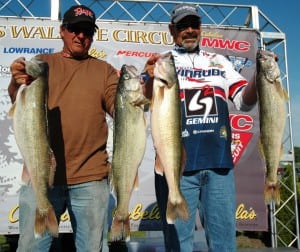 May 19, 2012—HURON, OH— South Dakotans Rick Olson & Tom Wiehoff finished strong to win a big-fish shootout by more than four pounds. They competed among 160 anglers from 13 states and one Canadian province at the Cabela’s Masters Walleye Circuit’s Lake Erie tournament out of Huron, Ohio.

“We’re very excited; any tournament you win is great and the MWC is especially tough because of the great anglers you compete against,” said Rick Olson, of Mina, SD. The team broke away from the pack to find secluded spots, and after an impressive start of 43.45 pounds on Day One, a 42.29-pound Day Two basket gave them an 85.74-pound total weight.

In all, the top 16 teams shared more than $45,000 in cash, sponsor bonuses and Big Fish Pot winnings.

Set for May 18-20, the tournament offered two days of competition on Erie’s world-class walleye fishery, with one day reserved in case of bad weather – though idyllic weather kept the tournament on schedule and wrapped up Saturday evening. A total of 771 walleyes weighing 5,144.98 pounds crossed the scale in the event. Big fish was a 12.89-pound behemoth brought in by Mark & Richard Bretz of Newark, OH—worth $1,175 from the Big-Fish Pot.

Walleyes were winners as well. The Cabela’s MWC donated $15 per boat, for a total of $1,200, to the Fish Huron organization to aid efforts to protect local fisheries. In turn, the group supplied an army of volunteers to assist with tournament operations. Since 1992, the MWC Conservation Fund has donated more than $300,000 to fisheries-enhancement projects.

The Cabela’s MWC is open to all anglers regardless of club or sponsor affiliation. Registration costs $650 per tournament per two-person team, and remains open through the Sunday prior to each event. Payouts are based on the number of teams fishing each event. Overall in 2011, the Circuit paid back more than 120 percent of entry fees in cash payouts, team of the year awards, sponsor contingencies and winnings in the no-entry-fee Cabela’s MWC World Walleye Championship. To register or for details, call (877) 893-7947; visit masterswalleyecircuit.com, or email events@masterswalleyecircuit.com.