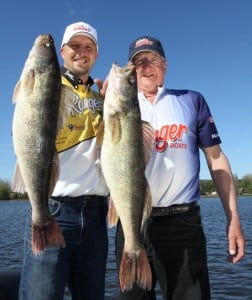 JANUARY 13, 2012—Minnetonka, MN—After a dream season on the Cabela’s Masters Walleye Circuit in 2011, the trail’s reigning Team of the Year is gearing up for more great tournament action in the months ahead.

“Last year was great, and we’re excited about the 2012 season,” said Jim Preissner, of Chilton, Wisconsin. He and partner Mike Olson, of Andover, Minnesota, claimed the coveted Cabela’s MWC 2011 Team of the Year title with 400.39 points after stellar finishes at the Mississippi River, Illinois River, Lake Erie and Detroit River tournaments.

“It was an exiting year,” added Olson. “Winning team of the year was one of the goals we set at the beginning of the season, and achieving it was awesome—especially with all of the great competition on the MWC.”

The pair fished a total of six events, including stops at Michigan’s St. Mary’s River and Big and Little Bays de Noc. Preissner says he enjoyed the challenge of figuring out the bite on so many different systems, and advises anyone wanting to up their walleye game to give the MWC a try in 2012. “This is a fantastic circuit,” he grinned. “It’s the place to fish if you want to test your skills, compete for great payouts—and have a lot of fun in the process. Mike and I are looking forward to making a run at consecutive titles!”

Preissner and Olson earned $13,000 in cash plus a pair of 14 k gold rings for winning the Team of the Year title, which is awarded to the team accumulating the most points from four tournaments. They also won more than $12,000 at the qualifiers and in divisional races, for a season total topping $25,000 in winnings—plus a free entry into the 2012 Cabela’s MWC World Walleye Championship, where they have a shot at a $25,000 first-place paycheck.

Registration opened Jan. 9 for the Cabela’s MWC’s 2012 season. Two-person teams are signing up to enjoy great walleye fishing while competing for thousands in cash and prizes on world-class walleye destinations from Colorado to Ohio.

The 2012 Cabela’s MWC qualifying schedule is as follows:

In 2011, the Cabela’s MWC paid out 120 percent of entry fees in cash and prizes. More than $1 million in payouts are up for grabs in 2012. First place at qualifying tournaments pays $30,000 (based on full field). Plus, sponsor contingencies add thousands more at each tournament.

Teams that fish four qualifying tournaments also compete for the coveted crowns of MWC Team of the Year. As a result of the MWC eliminating divisions—to give anglers more options in choosing tournaments—even more cash will be available in the 2012 TOTY pot. Overall winners will take home a minimum of $13,500 and the top 10 teams are expected to collect a total of more than $40,000.

Teams that sign up for three or more tournaments before noon (CST) on February 15 enjoy added perks. Considered “Premier Teams,” these earlybird entries have great odds of making the Championship, as Premiers are allotted 25 of the 45 total points-based berths (and are eligible for all 45). Premiers are also allowed to use convenient installment billing options, enjoy priority entry in all events, and qualify for the Okuma Premier Contingency, which awards $1,000 in great Okuma tackle packages at each qualifier.

New this season, all Cabela’s MWC anglers are eligible to compete for the MWC Recruitment Bonus, which awards a free 2013 tournament entry to the angler credited for bringing the most new teams to each 2012 qualifier. The entry (a full team fee) will be good for any of the Cabela’s MWC qualifiers in the 2013 season.

Single-tournament entries—which cost $650 per event—are accepted until midnight (CST) on Sunday the week of each event, although anglers are encouraged to register early to avoid being locked out of a full tournament.