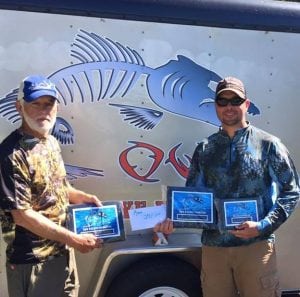 ANDOVER, Ohio -The Ohio Walleye Federation held its final tournament of the 2016 season on Pymatuning Lake located on the northern border of Ohio and Pennsylvania.  The two day event, held on Saturday June 11th and Sunday June 12th, allows anglers to compete for the title of 2016 In-Land Lake Champions.   Twenty- seven teams fished the 17 mile long lake looking for monster walleye that would win them a share of $6,000 in prize money.

The father and son team of Dennis Sharrone of Hiram, Ohio and Denny Sharrone of Chardon, Ohio were crowned 2016 OWF ILC Champions.  Team Sharrone took 1st place honors weighing in a two day total of 10 fish at a staggering 48.56 lbs.  Dennis Sharrone humbly stated “It still has not sunk in that such a little spot could produce such quality fish for two days”.   The family duo jigged firetiger Northland Weed Weasels on the edge of weeds in 3 ½ to 4 feet of water earning them a $2400 purse.

Second place was awarded to Sam Cappelli and Ted Jackson with 44.08 lbs.  Third place went to Anthony Naples and Christopher Durkin with a creel of 34.69 lbs.  The teams of Mitch Shipman and Rick Mulraney 34.31 lbs. and Bret Berkey and Nate Arnold 26.57 lbs. completed the top five.  The Haines Marine Day 1 Big Fish was won by Cappelli and Jackson and topped 8.00 lbs.   The Ravenna Marine Day 2 Big Fish belonged to the Sharrones weighing in at 7.38 lbs.

Mixed weather featuring two cold fronts and high winds throughout the week, kept anglers scattered.   Fishing reports indicated that the bite was off; there was no rhyme or reason as to where the fish were located.   Saturday featured 91 degree heat with 10-20 mph winds.  High winds persisted thru Sunday, but a cold front dropped temperatures 23 degrees for a day time high of 68 degrees.  Fish were found jigging shallow as well as trolling over deep water during prefishing.

The top five teams jigged up their creels in the north end of the lake using 1/16 oz. to 1/8 oz. Northland jigs and custom Samantha jigs.  Jigs were tipped with half crawlers or leeches.  Jigs featuring green, orange and gold color arrays caught the walleyes attention.   Team Sharrone reported jig fishing the same weed patch with 4th place finishers Shipman/Mulraney and commented on the sportsmanship each team exhibited to fish successfully in close quarters for two days.  Each team talked to one another, laughed and had fun fishing…..that is what it is all about!

The OWF also wrapped up its season by paying out $1000 in prize money to the season’s top 3 points teams.  Points are awarded to a team based on their finish in each of the previous tournaments.   A $500 payout went to the team of Sam Capelli and Ted Jackson for their 1st place finish.  2nd place honors good for $300 went to Anthony Naples and Chris Durkin.  $200 for 3rd place was awarded to Mitch Shipman and Rick Mulraney.   An additional $750 in sponsor gift cards were paid to teams finishing 4th thru 14th place.

The OWF also held a Cabela’s NTC side pot each day of the event(details can be found at walleyefederation.com).  The side pot allows anglers a chance to win a paid entry to the 2017 Cabela’s National Team Championship being held on Lake Erie in Lorain Ohio June 8th thru the 11th 2017.  Day one side pot winners were Dennis and Denny Sharrone with 22.64 lbs. Day 2 side pot winners were Matt Whitacre and Jim Gwynn with a weight of 19.66 lbs.  Whitacre/Gwynn diligently worked a troll bite in high gusting winds to grind out a 5 fish limit.

The Ohio Walleye Federation will hold its annual Vic’s Challenge at Geneva, Ohio Lake Erie Saturday July 16th and the Geneva State Park launch.   This event will also feature a NTC side pot.   The OWF events are possible because of our sponsor support.  For more information please visit www.fishowf.club or e mail fishowf@gmail.com.  Check us out on FACEBOOK- Ohio Walleye Federation.

Thank you Pymatuning State Park, community and businesses for supporting our anglers and playing host to a great time!!!