BERLIN CENTER, Ohio -The Ohio Walleye Federation held its second tournament of the 2017 season on Sunday May 7th at Berlin Lake.  Thirty teams took the water hoping to win their share of the $4500 in prize money. 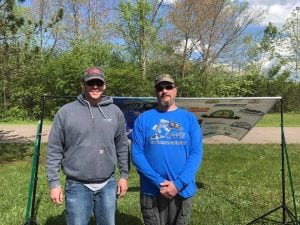 The team of Mitch Shipman of Kent, Ohio and Rick Mulraney of Cleveland, Ohio had the five key bites needed to win the day.  The winning team weighed in five fish at 14.93 lbs. and also won Big Fish at 5.03 lbs.  Mitch Shipman stated that “The fish came off a transition of rock and mud.  We pulled into our key spot in the morning, and our sonar screen was blank, unlike the day before.   We motored around on the structure looking for fish, and caught our first keeper.  We moved back to our key spot and once again, the sonar was loaded with fish.  We hooked our biggest fish of the day at 5.03 lbs, and then caught two 21” fish back to back.  It took us until just after noon to catch the last keeper”.  Their persistence and patience paid off to the amount of $2000 in prize money.  Shipman and Mulraney were the only team to bag a full creel of five fish.

Second place honors were earned by Erick Williams and Todd Ishee with two fish at 6.64 lbs.  Williams and Ishee caught the 2nd Big Fish of the day at 4.50 lbs.  Third place went to Collin Murphy and Pat Smith with one fish at 2.39 lbs.  The teams of Marion Erb and Robert Burkholder 2.25 lbs(one fish) and Mike Manfull and  Brian Hetrick 2.06 lbs(one fish) rounded out the top five.

Anglers experienced a difficult week of prefishing due to rising water, declining water temperatures, and an uncooperative weather pattern of cold, wind and rain.  In addition, the mild Ohio winter did not kill off the baitfish as expected.  Pods of baitfish are providing easy meals for non chasing walleyes.

The winning team reported catching their fish vertically jigging Vibes in 16’-20’ of water.  Their best colors were clown and blue and silver.  Other teams reported using orange jigs tipped with livebait and being fortunate enough to drop the jig right in front of the walleye triggering the much needed bite.

The Ohio Walleye Federation will hold its next event on Pymatuning Lake  May 21st at New Bowers Launch.   The OWF events are possible because of our sponsor support from Ravenna Marine, Vic’s Marine, Haine’s Marine, Worldwide Marine Insurance, Goschinski’s Fin Feather and Fur, and Warrior Lures along with many others.  For more information please visit www.fishowf.club or e mail fishowf@gmail.com.  Check us out on FACEBOOK- Ohio Walleye Federation.

The general public is welcome to attend our weigh-ins beginning at 3 pm the day of the event.  The OWF promotes “Fishing, Family, Friends and Fun!”

These sponsors make our tournaments possible!!!!