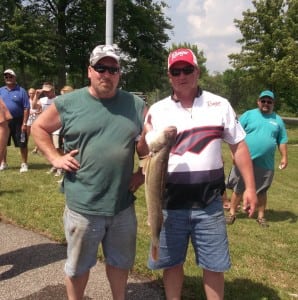 Coming off of a second place finish at the Walleye Madness Tournaments season opener, the father and son team of Erick Williams and his 8 year old son David Williams, pulled a double take in their second tournament together. Not only did the team capture first place in the Lake Milton event held on June 23rd, their 14.05 # five fish limit also earned them their second Lund Boats contingency bonus of the season for being the highest placing team fishing out of a Lund boat.

Second place went to the team of Nathan Arnold and Michael Porter with 13.90 #. They were also the highest placing team in the Cabela’s National Team Championship side pot, earning a paid entry and bonuses to the 2014 championship event to be held in Green Bay, WI. The team also captured the Mercury Marine contingency bonus as the highest finishing team using a Mercury outboard.

Third place went to Don and Cheryl Weaver with 12.85 # and 4th place was captured by the team of Rico Mixon and Marina Leydiker with 11.70 #. The events big fish, an 8.35 # Lake Milton trophy walleye, was caught by the team of Andy Birge and Rodney Hartwell.