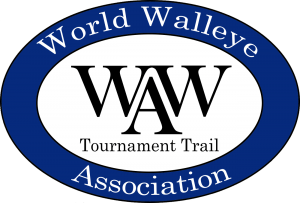 World Walleye Association (WWA)held its fifth and final Illinois qualifying tournament Sunday October 6th. The team of Jason Ramano, Tony Klepacki and Jerry Ubanozo took top honors with a six fish basket of 8.30 lbs. The bite was tough with a changing weather pattern  and a cold front that rolled through the evening prior to the qualifier.The team of Jason, Tony and Jerry is no stranger to the top of the leader board as they finished in one of the top six positions all year, including two third places and a first place. Their finishes this year put them at the top of a list of some very talented walleye fishing teams that were all in pursuit of the coveted “WRANGLER RUGGED WEAR” Team of the Year. As the 2013 Illinois division WRANGLER RUGGED WEAR Team of the year, the team has won over $2,500 worth of prizes awarded by Wrangler Rugged Wear, Optima Battery, Kunes County Ford, Boucher Ford and Do-It Molds. The Complete WWA qualifier results are available at www.worldwalleye.com

World Walleye Association is running two individual series of events in 2013 (Illinois and Wisconsin). All qualifiers are low entry fee events with a guaranteed payout over 100% for the whole series along with sponsor prizes from Power Pole, Wrangler Rugged Wear, Baxter Credit Union and Optima Batteries along with a long list of other 2013 sponsors. Top teams from each series will qualify for the WWA championship and all qualifiers in both Illinois and Wisconsin are TWF NTC side pot events.