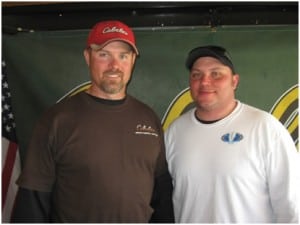 Mike Woerth and Ray Kuta were crowned the 19th annual Rose Placzek Walleye Tournament Champions and reeled in over $5,000 in cash and prizes on Sunday, May 5th at Sherman Reservoir.  The winning team caught three walleyes weighing 12.14 pounds, while fishing the one day Nebraska Walleye Trail Tournament event.  Their one day catch gave them less than a pound margin of victory over runner up Casey Williams and Chad Knispel, who landed three walleyes weighing 11.36 pounds.  “This is absolutely unbelievable and to also qualify for the National Tournament has always been a dream of mine. It  feels like shooting a Bull Elk with a Bow” said Mike Worth after their teams first ever tournament win.  “We were drifting and vertical jigging with live bait in 25-30 feet of water.”  Their first tournament win earned them a pay day including: 2 first place plaques, $3950 cash for first, $480 cash for big fish (8.75 pounder), $100 Cabela’s Anglers Cash, $300 paid entry to next year’s NTC, a gas stipend, and walleye federation custom jerseys and plaques.