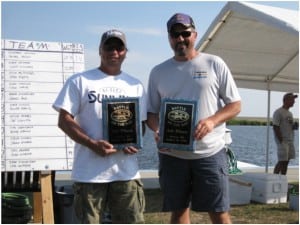 Every year for the past 8 seasons in August, we come together in Oconto WI and run one of the best kept secret Walleye Events in WI. OK, maybe it is not such a secret, but this year it must have been. With only 33 teams registering for the event ,we were left scratching our heads for reasons why…… Maybe it was the DNR boundary that scared off anglers? Maybe it was the “Tough Bite” the few days prior to the event? Maybe it was the NTC in Sault St. Marie dragging competitors north for the start of pre-fishing? I guess if you factor all of these together it may have contributed to us dropping 15 teams from last years event. The largest head scratcher once the event is complete, is all the compliments we receive from the competitors stating how this is one of the best run events in Wis-consin every year!!!

If we are such a fan favorite among Walleye tournament anglers then why can we not gain any ground past the 50 boat mark? OK, even though all of us that were there set-ting up and assisting in running the annual event were left with so many of these ques-tions, we can all agree it is always a great day and a great event!!!

The one big wild card this season was the fact that we had a 2014 NTC Green Bay Side Pot spot on the line. The highest placing side pot entrant in the main event would take home a paid entry into the big show here on Green Bay next spring.
The 33 teams left the harbor for the waters of Green Bay hoping to land at least 3 bites and 3 of the right bites. Rumors of a tough bite lingered at the registration meeting, but as with only 5 of the 33 teams coming in with Zero fish in the live well, it was hard to be-lieve the bite was all that tough. Out of the top 10 teams, we had 2 teams that were fishing their first Walleye Tournament ever!! That is quite an accomplishment, and as our President and MC for the event Chris Gasser pointed out to them “it is all down hill form here”!

5th place was a regular BotB team of Steve and Jason Goebel, with a 3 fish limit of 18.96 pounds.

4th place was the team of Phil Pahnke and Brad Winkler, bringing in a limit weighing 19.41 pounds.

3rd place found the likes of a Father and Daughter team fishing their first event to-gether. Stephen and Rachel Paulson hauled in a respectable weight of 20.1 pounds for a 3 fish limit. Rumor has it Rachel did all the reeling and Dad did not botch any net jobs all day!

2nd place was Brothers Tom and Mike Hubbard. One of the New Teams to Walleye Tour-nament fishing ,although you would not know it by the skill they dis-played by besting all of the field but one team weighing a basket of 3 fish for 20.25 pounds. They were boat Number 1 going out and were the very first boat to weigh in.
Finally the team that hoisted the 1st place wood for 2013 was a BotB perennial pair of anglers Chad Wertepny and Dean Arnoldussen. They have placed in the money several years at the Battle and finished as high as second last year, but this year their weight of 20.94 landed them on top of the leader board.

The Big Fish for the day was an 8.58 pound beauty caught by Nate Curell and Buster Roberts.

The final award of the day was to hand out the paid Cabelas NTC spot from all the side pot entries. For the first time this season a side pot event was not won by the tournament winners. Instead the 3rd place team of Stephen and Rachel Paulson were the high-est placing side pot entrants. They won a full paid entry into the 2014 NTC along with $200 in travel cash, a set of tournament jerseys and also side pot plaques. Congrats to all the teams and we look forward to seeing them all back again next year.