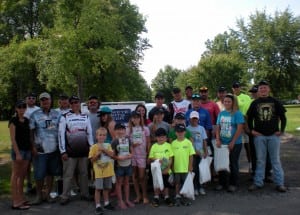 Walleye Madness Tournaments held their first youth fishing event titled Walleye Heroes on September 7th at Mosquito Lake in Cortland, Ohio.  The goal of the event was to provide an on the water fishing and boating experience for young anglers under the age of 17 years old. The event was similar to a pro-am fishing tournament, with the adult boaters providing all of the necessary fishing equipment and their fishing and boating experience.

“There are very few opportunities for young people to experience on the water fishing instruction from experienced anglers” stated John Csizmadia, the event director.  He added, “Walleye Heroes was created to provide that opportunity to young anglers in the north east Ohio region.”

In all, 15 young anglers participated along with nine boaters and eight additional parents or guardians. The event included young anglers from On Target Outfitters, a youth outdoors group from Canfield, Ohio.  For most of the youths involved, this was their first time fishing from a fully rigged tournament boat with a professional level adult angler teaching them the basics of walleye fishing.

Plenty of walleye were caught along with catfish, crappie, bluegill, and just about everything else that swims in Mosquito Lake. The event did not include a weigh in and all of the fish that were caught were released for others to enjoy. “We wanted this to be an experience for the kids, not a competition” stated Csizmadia. He added, “This allowed us to teach the kids the importance of catch and release and everyone finished in first place!”

Each youth angler received a trophy and an assortment of fishing prizes including rod and reel combos, tackle kits and hats. The boaters also received prizes ranging from gift certificates, reels, lures and other fishing tackle.