Ponca City, Okla.—March 20, 2017—After an exciting season opener on the Illinois River March 17-18 out of Spring Valley, Illinois, which saw great fishing, hefty payouts and a white-knuckle, come-from-behind victory, the Cabela’s Masters Walleye Circuit follows up by heading to what is arguably the world’s best early spring fishery for trophy-class walleyes—the mighty Detroit River.

Set for April 7-8 out of scenic Elizabeth Park in Trenton, Michigan, the regular-season qualifying event presented by Ranger Boats offers two-person teams two full days of competition on the U.S. and Canadian sides of the 32-mile waterway, along with their choice of downstream hotspots on legendary Lake Erie. 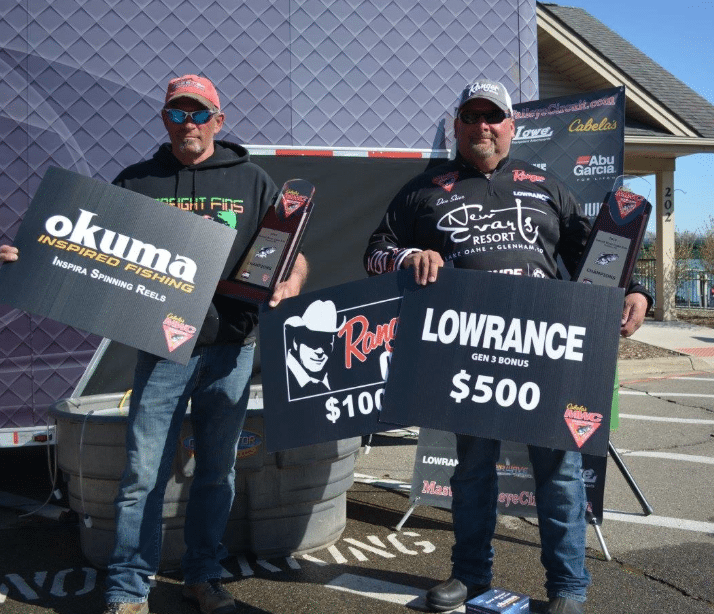 As a bonus, a variety of tactics produce monster walleyes at this event. Dougherty and Stier trolled diving crankbaits in 38 feet of water in Lake Erie in 2016, while the Bodinger brothers fished heavy jigs tipped with shad-tailed softbaits in 22 to 25 feet of water along a rocky straightaway on the Canadian side of the river to win in 2015.

“If you like catching big walleyes and enjoy the thrill of competition with a chance to win thousands in cash and prizes, this is a must-fish event,” says MWC Tournament Director Jack Baker.

Indeed, the Cabela’s MWC’s lucrative payouts provide even more inspiration to join the fun. Payouts are based on the number of teams entered in each event. Plus, the MWC Big Fish Pot, MWC option pot payouts, and sponsor bonuses including Ranger Cup, Lowrance Electronics, Okuma and AirWave add thousands more to the total. Plus, the first-place team will win a $1,000 Cabela’s National Team Championship Prize Package including paid NTC entry, travel stipend, team jerseys and plaques. Such winnings add up in a hurry. In 2016, for example, Dougherty and Stier collected a grand total of $20,670.

Boat inspections, take-offs and weigh-ins will be held at Elizabeth Park. Teams will be allowed to weigh five fish measuring 15 inches and over each day, and the team with the heaviest two-day total weight will be crowned the tournament champions.

Weigh-ins are free, open to the public and begin at 3 p.m. As a bonus to budding tournament fans, the Cabela’s MWC and National Professional Anglers Association will present a Youth & Family Fishing Clinic immediately after the day-one weigh-in. The first 50 youths will receive rod-and-reel combos courtesy of the NPAA.

Along with great payouts at each MWC event, teams fishing three or more tournaments in 2017 will battle for coveted berths in the 2018 Cabela’s MWC World Walleye Championship, set for October 2018 on Lake Michigan’s Bays de Noc out of Escanaba, Michigan. Teams fishing at least four qualifiers compete for Team of the Year awards, including a $10,000 sponsorship package and thousands more in cash and Cabela’s Cash cards, as well as fully paid entries into a full season of great walleye action.

Under the umbrella of The Walleye Federation (TWF), the Cabela’s MWC is open to avid walleye anglers from all walks of life. Deadline to register for the Detroit River tournament is Monday, April 3 at 4 p.m.