The Nebraska Walleye Association Kids Fishing Clinics Charity, Inc. sponsored four tournaments in 2014.  The first two were held at the Lewis & Clark Reservoir near Crofton, NE. on May 3 & 4.  The last were held at Merritt Reservoir near Valentine, NE. on July 26 & 27.

Two totally different types of fisheries and a change from late spring to summer patterns presented challenges for the tournament teams and on all days the winning teams used different presentations to overcome that.  At Lewis & Clark the team of Jason Hettler and Brandon Shada had a two day total of 27.23 pounds.  At Merritt the team of Mike Means and Chad Warriner had a two day total of 34.63 pounds.

The top three team finishers after this four tournament format are: Mike Means/Chad Warriner, Russ Glassoff/Rich McShane, and Chuck Pavelka/Will Pavelka.  Congratulations to these teams and they will be offered the opportunity to fish in the 2015 NTC at Milford Lake.

This organization is a 501 (c) (3) public charity that promotes fishing education and conservation in Nebraska to over 2000 youth annually.  Fishing is Fun! is the catch phrase used to conduct 15-20 kids fishing clinics across the state.  Each participant receives hands on fishing instruction from state certified volunteers and is given a free rod/reel/tackle box combination to take fishing.  The only entry required to fish in these tournaments is to volunteer at the kids fishing clinic held at the tournament site. At the Lewis & Clark Crofton Clinic 45 kids learned how to fish and one of them Eli Anderson 3 years old won a youth lifetime Nebraska hunting/fishing permit courtesy of the Fishing is Fun! kids’ charity.  At the Merritt Reservoir the kid’s charity partnered with the Nebraska Game & Parks, The Bass Federation, and the Nebraska Walleye Association to sponsor a Family Fishing Event. This allowed families to come and enjoy the sport of fishing as all equipment, bait, and instruction was available free of charge. The Nebraska State HS Bass Fishing Championship and the Nebraska Walleye Association State Championship were both going on during this weekend which provided a unique opportunity and backdrop for this event. 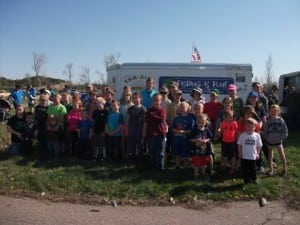 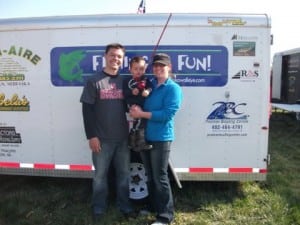 A big thanks to all who make: Fishing is Fun! in Nebraska.