As we approached mid-July here in Wisconsin, everyone assumes we are going to be looking at several weeks of upper 80 degree temperatures and some days in the 90’s and water temps pushing upper 70’s on the surface.  That thought gets us Big Fish Walleye Chasers jacked up about finding fish hanging off the deep structures of the northern parts of Green Bay.  This strange year we are having has thrown us many curveballs so far on the water so why would we think that July 20th for our Tournament out of Little Sturgeon would be anything different.

The scuttlebutt among the ranks was that absolutely nothing was biting to the north and the water was still loaded with Baitfish and cooler temps.   There was a solid bite happening down to the south but we all had to contend with a southern boundary line and hope the active fish stayed north of that line.

Once the boats were checked in and the release was counted off almost everyone turned south around Henderson’s Point and headed for open water.

The one nice break we all caught was that the forecasted stronger south winds held off for the day until all the teams made it back to the weigh in site.

As the SWC has proven many times in the past we all can catch fish no matter what the conditions and this day was no exception with only a couple teams not weighing any fish.  Teams shared reports of fish being caught on both cranks and harnesses as they weighed in their fish.

Once the tallies had been completed once team rose to the top as the clear winners of this event and also the new Team of the year!

First lets recap the other 2 teams that took home wood.  Ending up in third place with a 3 fish limit of 18.2 pounds was one of the Team of the year contenders Bret Leitl and Bill VanOrnum.  They set their sights on nabbing their fish off the infamous Shark Fin out in the mud.   Pulling harnesses all day they did mention that the bite seemed to slow after noon 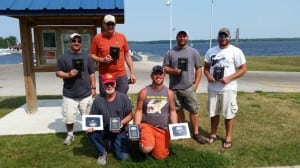 Second place wood went to a regular top 3 finisher in this Green Bay event, Charlie Henke and Paul Timmerman.  They edged out the 3rd place team by .13 pounds with an 18.32 pound limit to take second.  Charlie and Paul set down on an East Shore piece of structure and ended up pulling their harnesses going with and against the waves and they stated that due to the current they clearly caught more fish going against the waves rather than with them.

Now on to our first place victors!  There was genuine joy expressed by both Chad Nimke and his Grandfather Jim Kurtz after they weighed their impressive 3 fish bag at 23.85 pounds.   Their big bag was anchored by the big fish of the day a beautiful 9.52 pound fish.   The team was one of the few in the area of the Shark Fin pulling crank baits.   They also stated they stayed about 5 miles or so north of the majority of the boats on the Fin.  It is always something special to win any tournament but it is even more special to do it with your Grandfather.  This win is their second of the season and couple that with a 4th place finish on Lake Winnebago they locked up the Team of the Year point’s race going away!   As a matter of fact I believe they have the largest pint total of any team ever to win the team of the year title.

the club championship without Fall Fox River event in October.    Currently Jeff Hanson and Nick Ross have a slim 10 point lead over Brett Leitl and Bill VanOrnum, it will be a fun race to the finish line for those bragging rights!