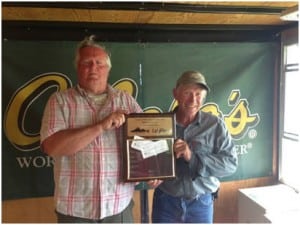 Ron Green and Andy Moberly were crowned NWT state Champions at Sherman on Sunday, June 23rd, 2013.  Green and Moberly weighed in 8 fish for 20.20 pounds over the two days and were awarded $3330 in cash for their finish.  Finishing in a close second was the team of Gene and Jake Brueggemann.  The duo weighed in 18.13 pounds for seven fish, including the big fish of the tournament (8.25 pounds) and took home over $2500 in cash for their impressive two day weight.  Finishing in third place with 9.25 pounds was the team of Ben Seim and Scott Willis earning them a total payday of $2040 including $1540 in cash and $500 in Cabela’s Anglers cash. They also earned a trip to the 2014 Cabelas National Team Championship. Trolling cranks was the presentation of choice for the top three teams.  It was a very good paying event and the NWT would like to thank all of the teams that participated this season.  We hope to see everyone again next year!  The NWT board will be working on next year’s schedule in the coming weeks. 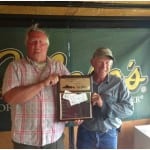 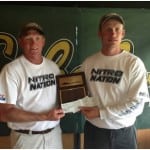 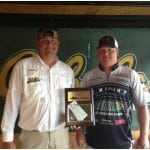