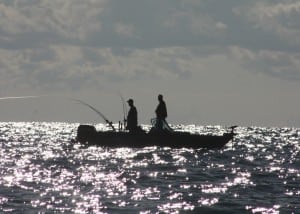 e Erie was the playing field for Walleye Madness Tournaments inaugural event on August 18th. With a respectable turnout of 29 teams, the stage was set for what would turn out to be an impressive tournament. The weather conditions on the lake were favorable and the competitor’s expectations for big catches were high as they motored out to the lake from the ARU launch in Ashtabula, Ohio.
Walleye Madness Tournaments is the vision of tournament director John Csizmadia, a seasoned walleye fishing veteran and marketing professional. “It was late March of this year when the opportunity to create Walleye Madness Tournaments came about”, states Csizmadia. A fortunate chain of events allowed him to capture sponsorship commitments from Buckeye Sports Center, Lund Boats and Mercury Marine. Additionally, Wildewood On Lake Savant donated a seven day trip to their Ontario fishing resort as a fundraising prize for the event series charitable benefactor, On Target Outfitters, a faith-based non-profit youth outdoors group from Canfield, OH.
The “Madness” of the event was the unheard of 150% payout versus the collected entry fees. “I’ve never seen and event offer that level of rewards” stated Csizmadia, who has competed in tournament events across the country. “None of this would be possible without our sponsors.” He adds, “The icing on the cake is that we are also helping a very worthy cause.”
The event attracted a mixture of seasoned tournament anglers and several teams that were new to the tournament experience. It was anyone’s game as the boats returned to the launch to weigh in their five fish tournament limit. First place was captured by the husband and wife team of 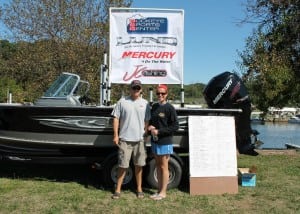 Mitch and Donna Shipman weighing an impressive 41.25 pounds. Second place went to the team of Scott Geitgey and Jason Kopf, who turned in a weight of 40.75 pounds. Joe Leighton and Mike Puruska won the Buckeye Sports Center/Mercury Marine Big Fish Bonus with a 9.45 pound walleye and finished third with a total of 38.15 ponds. The fourth place team of Marion Erb and Robert Burkholder brought 37.55 pounds to the scales helping them capture the Lund Boats Contingency Bonus. The top five was rounded out by the team of Ron Bradway and Bryan Whiteleather with their 37.40 pound catch.
The prevailing pattern of the day was targeting fish suspended around 50 feet deep over 74 feet of water 20 miles north of Ashtabula. Presentations included trolling deep diving crankbaits with weights or wire line and trolling stick baits behind divers to achieve the target depth. Boat control and speed were the critical factors in producing the larger catches.
The next event in the Walleye Madness series is scheduled for September 30th on Berlin Lake or Lake Milton in north east Ohio. “We’re keeping our eye on the water levels in the lakes and we’ll make the decision on the event location in early September”, states Csizmadia.
For information on how to become involved in Walleye Madness visit www.walleyemadnes.net or contact Csizmadia at 330-881-0994.
###

John Csizmadia is a northeast Ohio based tournament walleye angler. He actively promotes the sport of fishing, organizations related to and that support the outdoors experience, and youth involvement in fishing and the outdoors. For more information please visit www.jcfishing.com, e-mail john@jcfishing.com or call 330-881-0994.