The hard-fishing twins, from Sault Ste. Marie, Ontario, weighed in nine fish weighing a total of 36.74 pounds to top the field of 62 two-person teams competing in the two-day event. The win earned them the $11,100 first-place cash purse, plus $1,000 Cabela’s gift ca 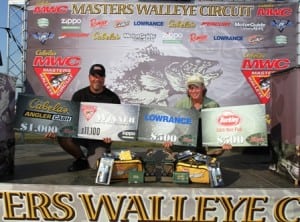 rd from the Cabela’s Angler Cash program, $500 Lowrance HDS Bonus, $500 in Berkley products for being the highest-finishing team using Berkley Baits, and U2 Bonus worth $60 in U2 product. Big fish on Day One and second place in the Big-Fish Pot on Day Two added $940 in cash, pushing their total to more than $14,000 in winnings.

A milestone in itself, the Giulianis’ victory was even more special because a year ago, they won the first-ever Cabela’s MWC qualifier on the St. Mary’s River. “This is awesome, it’s like winning the Stanley Cup,” said Joe, moments after taking the lead in a dramatic finish in front of a roaring riverfront crowd at scenic Aune-Osborne Park. “Winning back-to-back tournaments against the great fishermen on the MWC is amazing.”

Brother John explained that the bright sun drove the river’s walleyes onto the bottom, where live-bait rigs tipped with nightcrawlers and Berkley Gulp! Softbaits were key to their program, as were leaders made of Berkley Trilene 100 Percent Fluorocarbon.

The second-place team, Michigan anglers Mark Jacobs, of Afton, and Todd Schryer, of Cheboygan, took home $5,100 plus. Brothers John and Michael Kopcok, of Maidstone, Ontario, earned $3,400 plus the $1,000 Ranger Cup Award and $100 Oxygenator Bonus. In seventh, Dan Hassevoort and Ken Clark added a pair of Okuma Dead Eye rod-and-reel combos worth $350 to their $1,400 winnings for being the highest-finishing Premier Team. In all, the top 12 teams shared more than $32,250 in cash, plus sponsor bonuses and $2,350 in additional Big Fish Pot winnings.

Held August 24-26, the event offered two full days of competition on Friday and Saturday. Teams were allowed to bring their best five walleyes to the Cabela’s MWC scale each day. A total of 318 walleyes weighing 720.78 pounds crossed the scale. Big fish was a 7.66-pounder brought in by the Ontario team of Chris McMillan and Shane Turcotte. The Cabela’s MWC donated $15 per boat, for a total of $1,365, to the Inter-Tribal Fisheries Enhancement Program to aid efforts protecting the legendary St. Mary’s River system. Since 1992, the MWC Conservation Fund has donated more than $300,000 to outdoor-enhancement projects.

Weigh-ins were held riverside at Aune-Osborne Park in Sault Ste. Marie, and hosted by the Sault Convention and Visitors Bureau. The Cabela’s MWC, National Professional Anglers Association, Pure Fishing and Zippo Outdoor Brands present a Youth & Family Fishing Clinic immediately after the Day One weigh-in, giving away more than 50 free rod and reel combos, and a Zippo Outdoor Family Camping Pack valued at more than $100.

This was the eighth of nine Cabela’s MWC qualifying tournaments in 2012. Open to diehard anglers regardless of club or sponsor affiliation, the remaining qualifier will be held at Cass Lake, Minnesota, out of Stony Point Resort, Sept. 14-16.

Registration costs $650 per tournament per two-person team, and remains open through the Sunday prior to the event. Payouts are based on the number of teams fishing each event. Overall in 2011, the Circuit paid back more than 120 percent of entry fees in cash payouts, team of the year awards, sponsor contingencies and winnings in the no-entry-fee Cabela’s MWC World Walleye Championship. To register or for details, call (877) 893-7947; visit masterswalleyecircuit.com, or email events@masterswalleyecircuit.com.