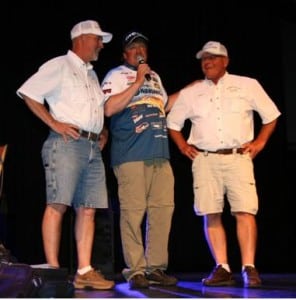 Rob Lampman of DeSoto, WI. & Harry Miller of Bellevue, IA are crowned the 2014 WAT/Diamond Jo Casino “River King’s Champion’s”.  The top 30 teams from the regular 2013 tournament season were invited to attend.  Rob & Harry competed against 29 other WAT Teams and were victorious with a huge weight of 41.67 lbs.  This tournament was a Walleye Federation Side Pot Tournament with all 30 teams competing.  The tournament was also a Catch, Photo, Release format that allowed each team to record their 6 best fish. The teams were allowed to fish pools 11, 12 & 13 of the Mississippi River from 7:00 AM to 3:00 PM on June 14, 2014.  The weigh-in was held at the Mississippi Moon Bar of the Diamond Jo Casino at 5:00PM & emceed by Walleye Pro Tommy Skarlis.