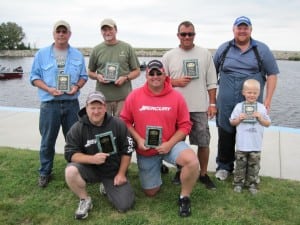 As the days on the calendar approached July 21st, you could almost hear the anticipation building across the SWC members. Fishing Green Bay for big Walleye, in our final Cabelas Qualifying tournament of the season, with a Cableas NTC paid entry on the line through the TWF Side Pot. The 3 days prior to our event, the AIM boys and girls had been out on the Bay hauling in quality fish after quality fish weighing big CRR bags of weight. I think many of the members were anticipating a dog fight with big baskets of golden glistening walleye tipping the scales…… Well thank you once again Mother Nature! Big time cold front conditions set in and cold water and heavy current changed water temps and turned the Bay upside down and inside out, shutting off many of the areas that held schools of tournament Walleye from the previous week.
As many of you are well aware by now, the membership of the SWC always has some guys rising to the top and figuring out a winning pattern. Cranks and harnesses were straining water from Larsons reef to Oconto Shoal and all the way south to Geanos reef. The teams that adjusted best and searched out the warmer water areas caught fish, many of us just washed off our lures for the day. Al-most 1/2 the field of anglers flat out burned fuel and just cleaned their baits off. That is a tough day of fishing.

For the other 1/2 of the crew, as always 3 teams rose to the top. The team of Randy Krueger and Rick Navis (Previous NTC Qualifiers) collected their first SWC Wood by weighing a solid bag of 21.85 pounds. Edging them out by less than a pound was the new SWC Team of Nate Provost and Rick Franklin with a firm bag of 22.06 pounds. Ultimately the team that once again laid a beat down on the Green Bay Walleye and the rest of the SWC was long time SWC member Pat Schuette and his partner (long time BotB participant) Kevin Adams. Their bag weighing 23.91 pounds contained the day’s big fish, a beast, at 10.92 pounds. Pat and Kevin were also the highest placing sidepot anglers so they walked away with a paid entry package into the 2104 NTC to be held on Green Bay, where they seem to know their stuff!!