Sunday May 4th Mother Nature decided to fully cooperate with the needs of the SWC and our second Cabela’s Qualifying event of the season.  Of course it always helps if the Walleye decide to cooperate also!  The initial indications at the launch in the morning were teams had been catching fish in practice and expectations ran high.  Once the boats all took off and teams settled into their spots, the Bay of Green Bay did not disappoint!  Fishing in both the lower Fox River and out on the Bay for the most part was very good.  The cooler spring and cooler water temps lent themselves to some great fishing when warmer water was located. 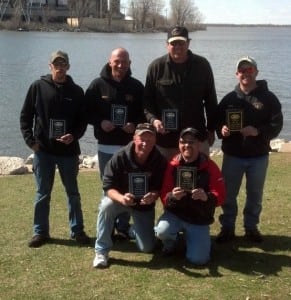 As the boats began to make their way to the weigh in, mumblings of a few large limits of fish were being passed around the group.  Once the fish began hitting the scales it was evident that a 24 pound bag of fish was going to be subpar to cash a check.

After all the numbers had been tallied and the data sorted, there were some monster bags of limits sitting on top.  The Big fish for the day was part of only a 2 fish bag but she was a dandy, tipping the scales at hefty 9.26 pounds.  The fish was caught by the team of Mike Behm and Pat Disterhaft.

The team weighing in at third place with a 5 fish limit was Charlie Henke and Paul Timmerman.  Their bag-o-fish tipped the scale at a solid 28.29 pounds.  Charlie and Paul are no strangers to finding some hog Walleye come game day on Green Bay.

Second place went to new members Marc Brook and Jay Lezoski, who managed to crank bait their way to a solid 5 fish limit tipping the scale at 28.84.  Newcomers’ nabbing some SWC wood is always a good sign to show just how our strong our membership is growing.

Locking in a back to back victory at the Green Bay Metro event was the perennial top 10 team of Jeff Hanson and Nick Ross.  Jeff and Nick (well mostly Jeff) entertained the crowd after their big win with some stories of the days fishing.  Jeff and Nick hauled in a monster 5 fish limit of 30.55 pounds.  Jeff and Nick also captured the TWF Side pot with their victory gaining them a paid entry into the 2015 Cabela’s NTC.

Congrats to all the teams for bringing in some great bags.  Our next Qualifying event will be on everyone’s favorite, Lake Winnebago on June 22nd.