After days of rain and unstable weather conditions, tournament morning was more of the same with chilly temperatures and of course, more rain. “I’m very happy to have our third straight sold out tournament this season” commented LEWT tournament Director Joe Yingling. “We have a great group of competitors; some of the best sticks on Lake Erie are here fishing with us today.” 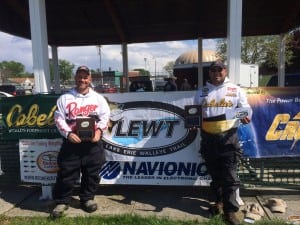 Dustin Clark and Adam Williams won the Medina Plating Early Bird award that goes to the top finishing team that entered all four events before the Early Bird deadline.

Jason Kopf will also receive $500 from Ranger Boats for winning a LEWT tournament under the Ranger Cup rewards program.

Finally, a huge thank you to tournament host Hi-Way Bait, Tackle and Lodging for providing dozens of pizzas for our anglers and spectators at the weigh in!

Geitgey and Kopf used crawler harness rigs east of Kelley’s Island to pull their winning fish.. Most of the teams that cashed checks reported using crawler harnesses, with a couple using deep diving crankbaits. A total of 241 walleye were brought to the scales by 50 teams, with the average weight being 5.47 pounds.

The WBSA is a social based club for anglers that fish in the Western and Central Basins of Lake Erie and its tributaries. Membership is open to anyone interested in fishing, no matter their location or skill level. Our goal is to present information in a manner that will help sustain and improve fishing in one of the greatest inland sport fisheries in the world. Scientific information, fishing techniques, locations and presentations are presented at our meetings by expert and knowledgeable speakers and tournament anglers from our group. These anglers are very open with techniques, and will help any member that is trying to learn new methods.