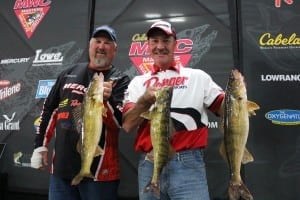 “It’s an unbelievable feeling,” said Kobriger, of Chilton. “Any one of the teams fishing here could have won this.” Held on mighty Lake Michigan’s Big and Little Bays de Noc out of Escanaba, Michigan, Oct. 17-19, the event pitted 47 elite two-person teams against one another for $100,000 in cash and prizes, plus thousands more in sponsor contingencies. Teams qualified for the no-entry-fee event by earning points during the 2012 Cabela’s MWC season at world-class walleye destinations from the Great Lakes to Pueblo, Colorado.

Incredibly, Kobriger and Zwick, of Wrightstown, took the title without weighing a single five-fish limit. Their dogged determination produced in a trio of solid catches during the three-day event, including 18 pounds, 1 ounce on Day One, 17 pounds, 11 ounces on Day Two, and 19 pounds, 7 ounces on Day Three for a 55-pound, 3-ounce total more than 10 pounds ahead of their closest rivals. It was their second Cabela’s MWC Championship crown, after winning the title in 2011. The victory also capped a great season that included a win at the Circuit’s Lake Michigan qualifier in late May.

“Words can’t explain how happy we are,” added Zwick. “Through the years, a person dreams of winning an MWC Championship, but taking two of them is amazing.” Along with ultimate bragging rights in the walleye world, he and Kobriger collected $20,000 for first place, plus the $1,000 Cabela’s Angler Cash contingency, $1,000 Ranger Cup bonus, $500 Lowrance HDS Gen2/Elite-7 award and $500 Berkley Baits prize package.

Zwick and Kobriger explained their go-to tactic was trolling spinner rigs 1 mph over the top of a weedbed near Round Island in Big Bay de Noc. “The water was 13 to 14 feet deep, and the weeds were about six feet tall,” said Zwick. Kobriger used an underwater camera to find the greenest cabbage available, and said the weeds held yellow perch, which in turn attracted hungry walleyes.

Another key to the presentation, Kobriger noted, was tipping the first hook of the crawler harness with a ¼-inch section of Berkley Gulp! Crawler, for extra scent. He also credited fellow MWCer Wayne Butz and other friends with whom they fish for helping dial in the bite.

A total of 257 walleyes weighing 741 pounds, 15 ounces crossed the Cabela’s MWC stage during the three-day event, which was filmed for national television airing on Federation Angler TV, on the NBC Sports Network. Teams were allowed to bring their best five walleyes to the scale each day. Under the Circuit’s catch-and-release format, a full 97 percent were released back into Bays de Noc. Big fish of the tournament was a 10-pound, 12-ounce walleye caught by Ohioans Matt Davis, of Marion, and Dan Gies, of Huron.

Based in Ponca City, Oklahoma, the Cabela’s MWC is oldest running national walleye circuit in America. Cabela’s MWC is owned by The Walleye Federation and is open to two-person teams regardless of club or sponsor affiliation. Entry fees are $650 per tournament, of which more than 100 percent is returned to anglers at the qualifiers, World Championship and Team of the Year races. Plans are under way for the 2014 tournament season, with details on locations, registration and more expected shortly. For more information, visit masterswalleyecircuit.com, email info@masterswalleyecircuit.com, or call (580) 765-9031.

For FULL results of the tournament click the following link: WWC Final Results