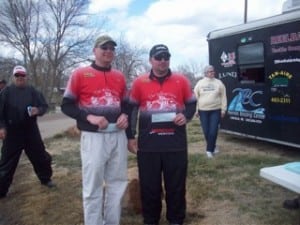 The Nebraska Walleye Association held its first tournament of the 2013 calendar year at Sherman Reservoir on April 21, 2013.  There were 38 teams involved in this very cold affair.  The rules meeting was held on Saturday night at the Trade Winds Marina where all the teams gathered for a quick but effective meeting ran by Chuck Pavelka and Mike Means.

The bite was not exceptional as many teams zeroed from the cold fronts and bad weather.  Our first place team of Dave Brandon and Joe Conroy brought in a little over 8 lbs., on 4 fish, and took home a little over $2300.00 for their effort.  The 2nd place team of Scott and Larry Placzek took home a little over $1200.00.  The third place team of Lane Werner and his son Layton had a nice finish with a check for $738.00.  4th place team of Brian Hunke and Bill McGannon cashed in for $591.00 and rounding out our tournament payout was the 5th place team of Woerth/Paul with a check for $492.00.  The big fish for the tournament went to Snyder/Snyder and won a healthy big fish pot of $685.00.  Remember that big fish is already paid for with your entry fee. The 4th place team of Brian Hunke and Bill McGannon not only won monies from our NWA tournament but also won the TWF side-pot.  This has already guaranteed them an entry into the 2014 NTC paid.  They will also get some additional stipend monies for travel through the TWF.  The next 2 NWA tournaments will be held at Lewis and Clark May 18th and 19th and these tournaments have already been registered for the TWF side-pot. To sign up for the TWF side-pot please go to https://walleyefederation.com/ and hit the side pot tab at the top of the page.  This is a great opportunity for everyone fishing our events to qualify for the 2014 NTC. Thank you needs to go out to Chad Warriner, Rick and Dalton Smutny, Rick Hesse, Roger Scheckler, Ken Gewecke, Rob Hadan, Ray and Betty Clayton, The Trade Winds Marina and everyone else involved in making this tournament run as smooth as it did.