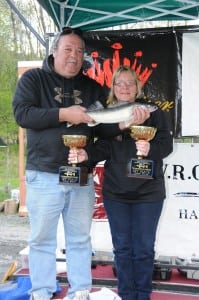 Fisher-woman Bonnie Wise carries the husband-wife team to first place with the Big Fish of the tournament. She and her husband David were all smiles being called to the stage twice to receive checks. The first check for Big Fish, 3.7 pounds, was $2,420.00 and the second for heaviest basket, 9.94 pounds, was $2,348.00.

Those who pre-fished the first of the week found all their effort washed away by the rain. The Allegheny Reservoir rose 6 feet in three days from pouring rain and was heavily colored. The Willow Bay launch was reduced from the ability to launch 2 boats to only one at a time. The rain finally stopped late Saturday just hours before the morning launch.